When Your Child is the Bully 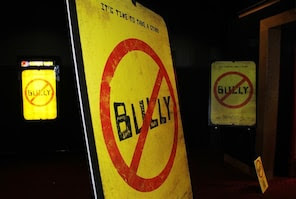 October is National Bullying Prevention Month, and in the coming weeks organizations and schools across the country

The documentary film “Bully” traces the lives of those affected by bullying. (Danny Moloshok - Reuters)will raise awareness around the issue. It’s a time when teachers, parents and administrators hope to turn the tide on a subject that has been around as long as children themselves.

I’m a father of four, three of whom are between the ages of four and 10. While I encountered bullies growing up in elementary school, bullying hasn’t been something that I’ve focused much of my attention on as a parent. That all changed one day recently when my family was confronted with the issue. But not for the reason that you might think: To my surprise, my child was the one doing the bullying

One evening after school, we received a call from our daughter’s teacher. She told us that several girls at the school had formed an exclusive group with the express purpose of excluding another young lady in the class. When a disagreement between two classmates turned ugly, our daughter, who is 10, wasn’t strong enough in the moment to resist the temptation of joining the crowd.

Thankfully, one of the students in the group was bold enough to approach a teacher to alert her to what was going on. The teacher immediately pulled all of the girls in to find out what was the source of the disagreement. She then informed the parents so we could all have candid conversations at home to ensure that this behavior didn’t continue.

As parents, I think there’s often an inability to see our children as the ones on the wrong side of situations like this. So at first my wife and I were surprised. Could our sweet, tender child really be involved in such an activity? The answer is yes. Like in so many bullying situations, our daughter was caught being a follower instead of a leader. I’m sure our daughter had a deep-seated feeling of wanting to belong with the larger group of girls, or perhaps feared being next on the list to be ostracized.

We sat our 10-year-old down and explained that her behavior was unacceptable. At first, she didn’t see herself as a bully. She reasoned that somehow the victim was responsible because she was not well-liked. Our initial discussion with her seemed to fall on deaf ears.

We took more time to explain that starting a club with the sole mission of excluding another student is mean-spirited. We also reemphasized the importance of being a leader and making decisions that may not be popular with her peers. As the conversation evolved, she slowly started to see the source of our concern and how the actions of her and her friends were so eerily similar to the mean girls who appear on episodes of her favorite TV shows.

Meanwhile, as we reached out to other parents to see what they heard from their children, we became concerned that some didn’t see the incident as a big deal. But it was a big deal for us. Physical intimidation is not the only form of bullying. We know that gossiping and intentionally alienating a classmate can also be emotionally damaging. More than 160,000 students stay home from school each day because of bullying. We wanted to make sure our daughter did not cause another child to be included in that number.

For other children, who may be afraid to alert adults, or who may face the rising incidents of cyberbullying with no place to go, this month is for you. As adults, we have the obligation to make sure that the children in our families and around us don’t get bullied, and also that they are not the ones carrying out the bullying activities. We have to be the voice of the village that lets them know that we care about them and that, although children are mean, their lives will become so much bigger than what they were experiencing in their early education years. We also have to provide them with enough trust and confidence that, if they do come to us, we all take the situation seriously.

In my personal effort to lend my voice, I recently partnered with actor/rapper Tray Chaney (best know for playing Poot on the HBO drama “The Wire”) to create the visual for his anti-bullying anthem, “Mike Bully (Stand Up For Our Future)” (see below). We hope that this song will reach children and provide that courage when adults are unable to reach them.

We would love to hear if you have any personal experience of advice for others on what to do when your child is the bully!
Posted by Accelerate Center at 8:47 PM