When my daughter was 18 months old, my husband and I decided to take her on a little summer holiday. We picked a coastal town that's a few hours by train from Paris, where we were living (I'm American, he's British), and booked a hotel room with a crib. Bean, as we call her, was our only child at this point, so forgive us for thinking: How hard could it be?
We ate breakfast at the hotel, but we had to eat lunch and dinner at the little seafood restaurants around the old port. We quickly discovered that having two restaurant meals a day with a toddler deserved to be its own circle of hell.
Bean would take a brief interest in the food, but within a few minutes she was spilling salt shakers and tearing apart sugar packets. Then she demanded to be sprung from her high chair so she could dash around the restaurant and bolt dangerously toward the docks.
Our strategy was to finish the meal quickly. We ordered while being seated, then begged the server to rush out some bread and bring us our appetizers and main courses at the same time. While my husband took a few bites of fish, I made sure that Bean didn't get kicked by a waiter or lost at sea. Then we switched. We left enormous, apologetic tips to compensate for the arc of torn napkins and calamari around our table. 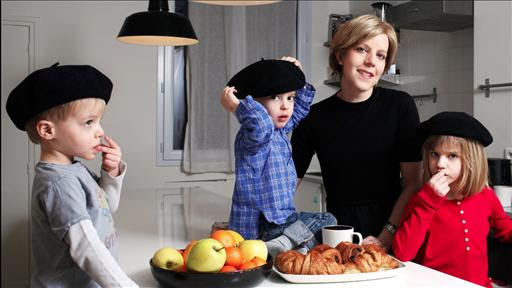 Pamela Druckerman's new book "Bringing Up Bebe," catalogs her observations about why French children seem so much better behaved than their American counterparts. She talks with WSJ's Gary Rosen about the lessons of French parenting techniques.
After a few more harrowing restaurant visits, I started noticing that the French families around us didn't look like they were sharing our mealtime agony. Weirdly, they looked like they were on vacation. French toddlers were sitting contentedly in their high chairs, waiting for their food, or eating fish and even vegetables. There was no shrieking or whining. And there was no debris around their tables.
Though by that time I'd lived in France for a few years, I couldn't explain this. And once I started thinking about French parenting, I realized it wasn't just mealtime that was different. I suddenly had lots of questions. Why was it, for example, that in the hundreds of hours I'd clocked at French playgrounds, I'd never seen a child (except my own) throw a temper tantrum? Why didn't my French friends ever need to rush off the phone because their kids were demanding something? Why hadn't their living rooms been taken over by teepees and toy kitchens, the way ours had?
Soon it became clear to me that quietly and en masse, French parents were achieving outcomes that created a whole different atmosphere for family life. When American families visited our home, the parents usually spent much of the visit refereeing their kids' spats, helping their toddlers do laps around the kitchen island, or getting down on the floor to build Lego villages. When French friends visited, by contrast, the grownups had coffee and the children played happily by themselves.

By the end of our ruined beach holiday, I decided to figure out what French parents were doing differently. Why didn't French children throw food? And why weren't their parents shouting? Could I change my wiring and get the same results with my own offspring?
Driven partly by maternal desperation, I have spent the last several years investigating French parenting. And now, with Bean 6 years old and twins who are 3, I can tell you this: The French aren't perfect, but they have some parenting secrets that really do work.
I first realized I was on to something when I discovered a 2009 study, led by economists at Princeton, comparing the child-care experiences of similarly situated mothers in Columbus, Ohio, and Rennes, France. The researchers found that American moms considered it more than twice as unpleasant to deal with their kids. In a different study by the same economists, working mothers in Texas said that even housework was more pleasant than child care.
Rest assured, I certainly don't suffer from a pro-France bias. Au contraire, I'm not even sure that I like living here. I certainly don't want my kids growing up to become sniffy Parisians.
But for all its problems, France is the perfect foil for the current problems in American parenting. Middle-class French parents (I didn't follow the very rich or poor) have values that look familiar to me. They are zealous about talking to their kids, showing them nature and reading them lots of books. They take them to tennis lessons, painting classes and interactive science museums.
Yet the French have managed to be involved with their families without becoming obsessive. They assume that even good parents aren't at the constant service of their children, and that there is no need to feel guilty about this. "For me, the evenings are for the parents," one Parisian mother told me. "My daughter can be with us if she wants, but it's adult time." French parents want their kids to be stimulated, but not all the time. While some American toddlers are getting Mandarin tutors and preliteracy training, French kids are—by design—toddling around by themselves.
I'm hardly the first to point out that middle-class America has a parenting problem. This problem has been painstakingly diagnosed, critiqued and named: overparenting, hyperparenting, helicopter parenting, and my personal favorite, the kindergarchy. Nobody seems to like the relentless, unhappy pace of American parenting, least of all parents themselves. 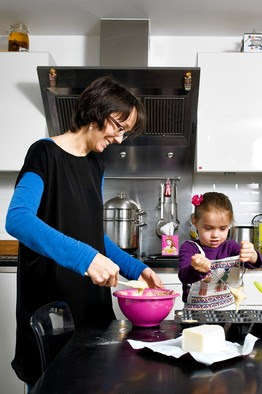