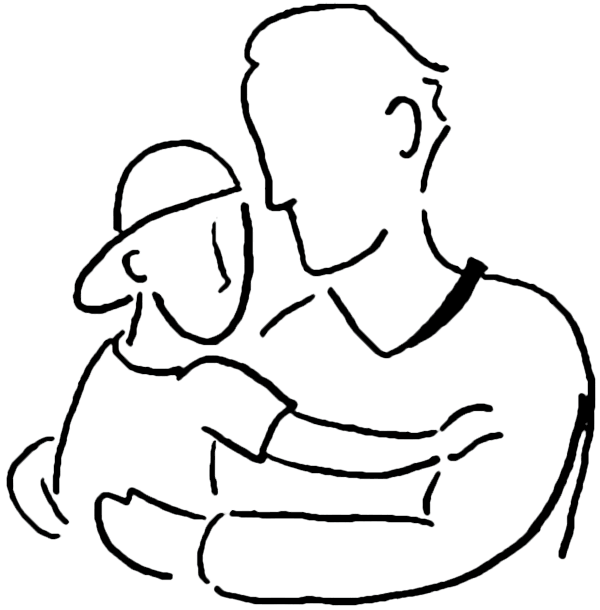 Bringing up a child in most societies is considered the exclusive duty of the mother. But the role of a father is as important as a mother's in a child's development. Numerous studies have revealed that children with involved fathers are at an advantage, socially and academically, over children who have little or no relationship with their fathers.

A father's love is as important to a child's emotional development as a mother's, a large-scale study has confirmed. In the new study, it revealed that the love of a father is one of the greatest influences on the personality development of a child.

In the past, psychologists studying the development of children focused mainly on children's relationships with their mothers. But these days, they have come to realise that fathers play a exceptional and vital role in nurturing and guiding children's development.

A lot of people now agree that fathers can be just as nurturing and sensitive with their babies as mothers. As their children grow, fathers take on more roles of bringing up their children intellectually and socially.

Examining the cases of more than 10,000 sons and daughters revealed how a cold or distant father can damage a child's life, sometimes for decades to come.

The review of 36 studies from around the world concluded that the love of a father is as important to children as that of their mothers According to a researcher, Professor Ronald Rohner, he said that fatherly love is key to development and hopes his findings will motivate more men to become involved in caring for their offspring. 'In the US, Great Britain and Europe, we have assumed for the past 300 years that all children need for normal healthy development is a loving relationship with their mother,' he said.

A father's input is particularly important for behaviour and can influence if a child later drinks to excess, takes drugs or suffers mental health problems. The study underlines the importance of intact and stable families where both the father and the mother are committed to bringing up their children together.

It is generally assumed that fathers are just there as support for the mothers and to support the family financially but are not required for the healthy development of the children.

That belief is fundamentally wrong and people have to start getting away from that idea and realise the father's influence is as great, and sometimes greater, than the mother's.

According to a child care expert, Mrs Rebecca Adams, children and adults everywhere irrespective of race, culture, and sex tend to react the same way whenever they perceive any form of rejection. Therefore, a father's love is just as important as a mother's, she said. She explains: "Bringing up children is not the duty of mothers alone. Most children are better off when their mothers and fathers bring them up together. This involves spending time with children, providing emotional support, giving everyday assistance, monitoring children's behaviour, and providing consistent, fair and proportionate discipline".

Take education for instance, a father's role during his children's school years has other positive outcomes. When children start school, the first years are usually difficult for them but fathers around they can help their children adjust, she notes. "When fathers are supportive, their children have little or no problems at school such as poor performance. This is s true even after taking into consideration the influence of the children's mothers".

Another aspect of child upbringing where fathers have special influence on children is moral development because fathers provide guidance and direction, Adams said. Fathers also influence their children's moral development by providing models for their children. The expert also noted that a father's special influence on child's development of personal morality lasts into adulthood. Children whose fathers were highly involved when they were growing up tend tolerant, understanding and engage in more socially responsible behaviour than those with little or no fatherly involvement, she said.

While the overall belief in parenting remains that mothers are the caregivers and fathers are the financial providers, one thing is certain: a father has a crucial role in a child's development, Adams said.

Several studies have found that a child's wellbeing depends heavily on the relationship between the father and mother. The quality of the marital relationship, for good or bad, affects parents and how they interact with their children.

The involvement of a father not only affects the children but their mother as well. When fathers are emotionally supportive of their spouses, mothers as well as children are more likely to enjoy a greater sense of wellbeing.